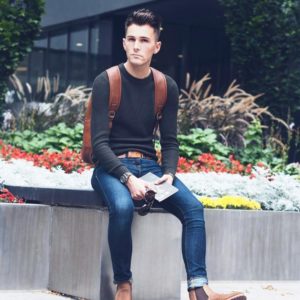 Although there are all sorts of jean styles in today’s society, I will never forget seeing a man wearing skinny jeans for the every first time.

His legs obviously looked hella skinny, but the fact that the jeans were pressed pretty tightly against his legs from his waist down to his toes meant that I could almost “see” his entire lower body shape without using much of my imagination.

And even though I don’t have anything near my crotch area personally, I couldn’t imagine him being comfortable at all without any breathing room for his manhood.

In any case, that brief experience brought me into the world of skinny jeans for the first time, which is our topic for today.

Although I didn’t realize it at the time, skinny jeans are often worn by hipsters.

In fact, I am 90% certain now that I think back on that day that that guy wearing skinny jeans was actually a hipster.

And while this doesn’t necessarily surprise me, it does seem pretty interesting that such a seemingly random article of clothing is so closely associated with a particular group of people.

So why do hipsters wear skinny jeans in general?

The answer lies in the body types that hipsters typically have – a skinny one!

That should have been pretty obvious but to be more specific, hipsters often wear skinny jeans because their lifestyles lead them to make such fashion choices.

Most typical men live a lifestyle that promotes fitness and overall well-being.

Doing things like sports or lifting weights are fairly common and as a result, their body types are molded into ones that can adequately do such activities.

Said another way, if you were a guy and you had amazing thighs and glutes and the like, not only would skinny jeans look bad on you, but they honestly would not even fit on you at all.

Instead, you would be wearing more straight fit jeans or something to emphasize your assets rather than kept them hidden.

Hipsters on the other hand live an entirely different type of lifestyle, one in which such rigorous activity is not very common.

Things like music and intellectual topics which don’t require fitness.

And they are also typically a lot healthier, eating vegetables instead of fast food.

Plus they are typically younger which means that they have a higher metabolism which results in more calories burned in general.

As a result, they are typically much skinnier than your average guy.

And that leads to the tendency for hipsters to wear skinny jeans.

Keep in mind though that the size of the person may not be the deciding characteristic when it comes to hipsters and skinny jeans.

While my previous example explained the generalized choice of wearing skinny jeans as a matter of personal fitness and how it dictates the clothing that they wear, the reality is that many hipsters simply wear skinny jeans in order to be alternative.

In fact I have seen plenty of average-sized males or even larger wearing skinny jeans.

So regardless of a hipster’s particular body type, skinny jeans can (and very likely) will be a huge part of their wardrobe.

So there’s the rundown on skinny jeans.

Although we can’t ever be 100% certain on the origins of skinny jeans, hopefully my words have given you some insight into the possible logic and reasoning behind why so many hipsters around the world wear skinny jeans.

Whatever the reason, skinny jeans are a huge part of hipster culture and one that cannot be ignored, no matter how hard you try.